A Large Piece of Paradise

In 1900, Baroness Hélène de Zuylen from Nyevelt de Haar, née Rothschild built the Villa Paradisio on a Park set on almost two hectares on the lower part of the Cimiez Hill.

Former lover and muse of writer Renée Vivien, the “1900 Sappho “, the Baroness rarely stayed at the villa, and finally donated it to the City of Nice.

At some point before World War II, Mussolini having confiscated Villa Medici, Villa Paradisio became the seat of the Grand Prix of Rome, then, after the war and until 2006, it housed the Regional Music Conservatory.

It now houses the Central Directorate of Education for the City of Nice. In accordance with the wishes of the Baroness, the Park remains accessible to the public, with beautiful century-old trees, flower beds, and playgrounds for children.

In 1966, a part of the Park was allocated for the building of the “El Paradisio Residences”, and entails two buildings located along Avenue Brown Séquart.

Ideally situated in a dominant position and a stone’s throw from the Chagall Museum, this beautiful residence offers luxury apartments, all with large terraces and breathtaking views of the park, the city of Nice and the Baie des Anges.

YOU HAVE A PROPERTY FOR SALE OR RENT IN THIS RESIDENCE ? 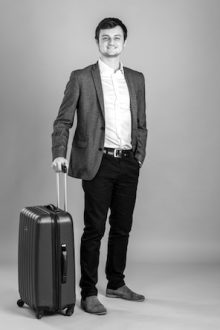